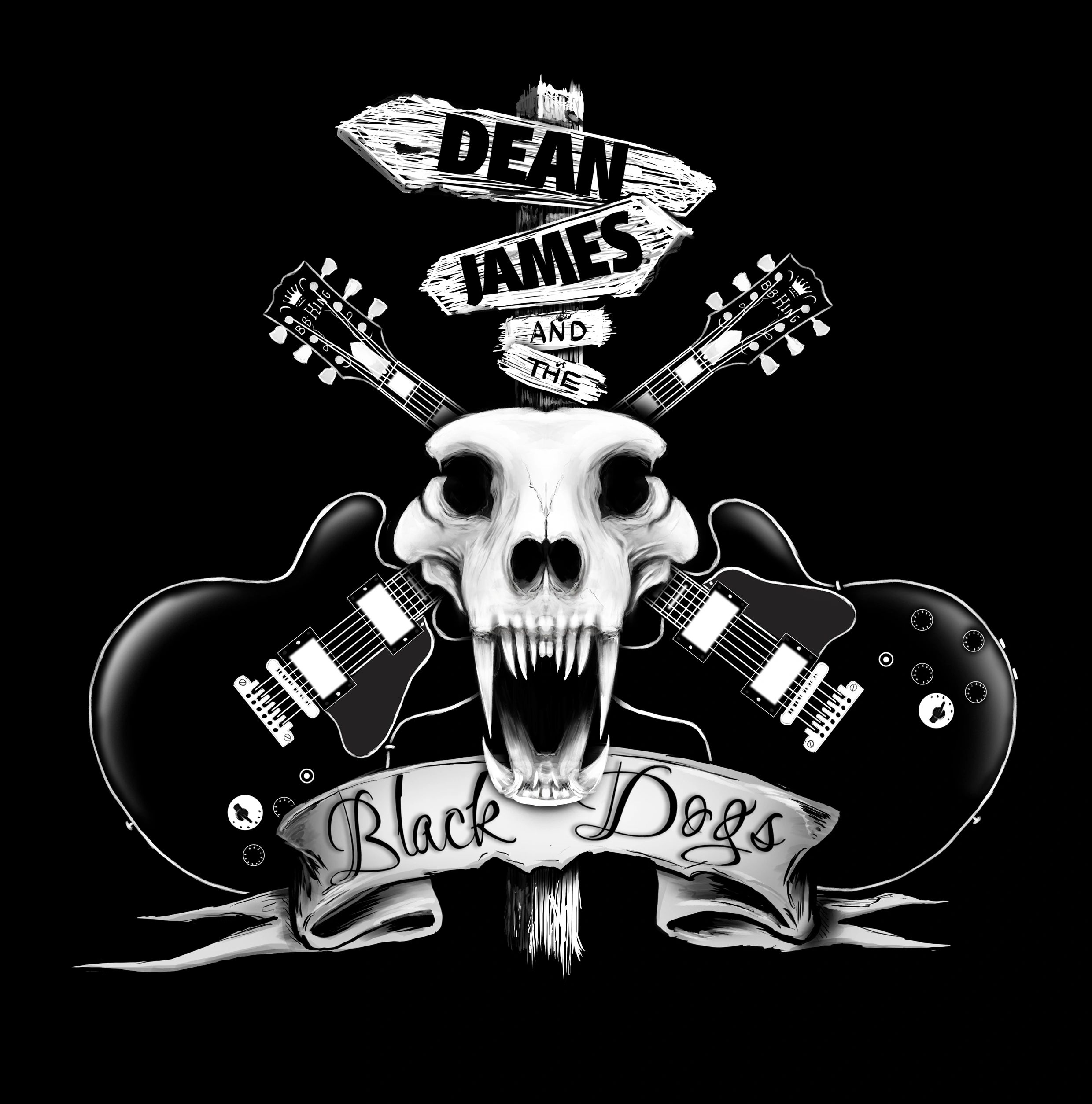 Two Times HMMA nomineDean James and the Black Dogs are a hard hitting dirty Blues-Rock outfit from the UK. They have a very diverse range of influences, from the great singer songwriters of Billy Joel and Damien rice to the blues legends of John Lee Hooker and seasick Steve. When Dean James was a teenager he was overwhelmed by Nirvana and sites Kurt Cobain as his main inspiration. Think of the Black Dogs as Blunge (Blues Grunge) with a little bit of acoustic tenderness thrown into the mix.

Dean played for many years in covers bands in the UK before leaving that circuit to concentrate on his original material. He was soon signed by local indie label ‘Forgotten City Records’ where he recorded his debut album ‘Pure’. Pure caught the attention of newly formed GEM records UK and was signed to the label to produce ‘Truth’.

Deans newest album ‘Truth’ is gaining momentum in the USA and is being played across the country via hundreds of radio stations, and a short tour of the US and recording of their next album in Nashville with award winning producer Geoff Wilbourn is also in the planning stages. One of the songs from the album “Another Way” was nominated for a Hollywood music and Media award. Dean travelled to Hollywood for the awards ceremony and was dismayed by the amount of Homeless that lived on the streets in LA. He is now currently writing his third album Called Ghosts which is heavy inspired by his time spent in Living amongst the locals of Sunset Boulevard.

The Black dogs are a transient band of musicians with many changes in the line-up over the years, this has formed his sound into something very special as he has taken influences from his members and transformed them into the Black Dog sound which is unique. At the heart of this dean has been a tenacious songwriter, writing about the social and economic climate of the times whilst trying to find where his place is in our complex world. He has been likened vocally to Chris Cornell and Shawn James.

The Black Dogs music has been described as, hypnotic, dirty, soulful, and beautifully tender. His recent reviews of Truth attempt to explain what his music as all about, listen for yourselves

Dean James is a UK musician that has been playing for 15 years as a solo artist or fronting his own bands. This is his second album with the trio, Black Dogs. His sound on Truth is an interesting mix of blues, grunge, Americana, and Gothic. It’s dark, but like most dark music, it is compelling too. His sound is like that of U.S. Chicago-based Shawn James (no relation) in both its darkness and it's rather genre agnostic sound. While Shawn has more range in his immense vocal chops, Dean is no slouch. He can wail with the best of them as evidenced in many album songs but especially in the opening “Hollywood” and the closing “Higher.”

The Black Dogs are not your conventional trio. James plays rhythm guitar, Shannon Pearl provides the vocal harmonies and John Timney does everything else – lead guitar, bass, drums, percussion. He’s an excellent lead guitarist and a capable one-man rhythm section. Make no mistake that it’s Dean James” vocals that are the major appeal of the band, supported by heartfelt lyrics and grooves that range from blistering foot stompers to trance-like effects, and even to engaging ballads.

The grunge element represents both the sound and the political protest aspects of James’s music. He has done considerable charitable work for refugees, as one example. He’s more on the Soundgarden side than bands like Pearl Jam or Nirvana. It’s more intimate because he is mostly singing about his own personal journey, trying to find optimism and comfort with himself, whether “Talking To God” or asking for “Another Way.” Like grunge artists, he’s using anger and (self) love as weapons of protest and protection.

While most albums would feature the title track as its centerpiece, this one is a bit too long and repetitive. The stronger tunes are the intriguing “Talking to God,” his pulsating “Daggerman, ”Hollywood,” “Higher,” and the two ballads – “Wait for You” and “Love You.” There’s a nice pacing to the album, good shifts in dynamics and James' vocals which are emotively soulful throughout.

Dean James may hail from the north of England, but his music sounds as if it originated in America’s deep south, thanks to its rootsy flourishes and swampy tinges of filtered R&B. On his striking new album, the appropriately titled Truth, James -- accompanied by his band the Black Dogs -- makes a mighty impression courtesy of a dark and deliberate sound that's flush with both angst and invective. Songs such as “Talking To God,” “Higher,” “Wait For You” and “Change Me” in particular show a driving determination that can seem intimidating at times, but remain consistently absorbing throughout. James and company parlay this formidable impression instantly from the outset, beginning the album’s initial offering “Hollywood” and a repeated refrain that commands immediate attention. And while the rest of the album isn't always quite as emphatic, every track that follows is similarly striking, whether it’s the Doors-like delivery of “Sleazy” or the dimly lit ambiance of “Another Way,” that latter immersed in psychedelic suggestion. James plays the part of a daring shaman, undeniably intriguing and yet leaving little opportunity for penance. Even the quieter moments -- be it the acoustic trappings of “Fine Tomorrow,” the beguiling serenade “Love You” or the subdued yet suggestive title track -- prove evocative and emotive. Taken in tandem, that’s what inevitably makes this Truth so consistently compelling

This is one seriously good album! Dean James writes powerful music on some deep topics, and his voice bears all of the angst of many great blues singers, achieving his listener’s empathy from the moment he starts to sing.

Dean’s potential was clear on his first album, ‘Pure’, released in April 2016, full of songs about depression, the plight of refugees, and the like. His style and strong lyrics probably wouldn’t be for listeners to Smooth Radio as they drive to church on a Sunday, and thank the Lord for that! However, the album and his live performances did enough to impress the men behind the relatively new management and publishing company GEM (Global Entertainment and Media), and to persuade them to sign Dean for their record label.

One of the company directors is Nashville-based Geoff Wilbourn, who has worked with the likes of Johnny Winter and David Honeyboy Edwards. He did the production work on ‘Truth’, and his engineer Adam Taylor had a major input, whilst he album was also mastered in Nashville by Eric Wolf. Needless to say, the sound quality throughout the album really is superb.

The title of the opening track on ‘Truth’ may be anathema to many blues lovers. Plenty of blues songs have references to the deep south and the Mississippi Delta, although I can’t recall many about ‘Hollywood’. But, I suppose it shouldn’t be too surprising, when the surname of the artist is ‘James’ and his first name is ‘Dean’...

After a single chord from John Timney’s guitar makes sure you’re awake, ‘Hollywood’ kicks off with an almost religious chant.... Mr James repeating “Oh Lord, help me now” with a constant droning sound in the background. Timney’s guitar is used sparingly but very effectively, the drum beat

maintaining the tempo, as Dean develops the movie theme, with references to Fred and Ginger.

Just when Dean’s lyrics show signs of cheering up, he again implores the big man upstairs to help him, as “the world won’t know my name”. Maybe he’s come to terms with that by the end of the track, as “the world is a brighter place to me”. This is a cracking way to open the album - a song with a sound that is uniquely Dean James and the Black Dogs.In the title track there are no such leanings towards any level of cheerfulness. Just what the ‘Truth’ is that can’t be believed is difficult to interpret, but whatever you might think, it sounds like a truth that might have been best left hidden. The masterful guitar work from Timney for the first minute and a half sets the dark tone and feel of the song, so you are almost prepared for the vocals that allude to secrets and cover ups in a boy’s life, who gets called names and feels ‘paralysed deep inside’, until he finds the ‘truth’. As we get two thirds of the way into the song, a single reference is made to finding ‘Black Dogs’, which I take to be a realisation that he is depressed, perhaps at the realisation of how he came into this world - the realisation of who, or what his father really was. The dark character of the songs continues throughout the album, and the quality quotient remains constantly high. I love the way blues artists sometimes use jaunty or upbeat rhythms and melodies to almost distract the listener from the sad depressing meaning of the lyrics. ‘Sleazy’ just about falls into this category, bouncing along and providing some toe-tapping relief to the more serious stuff. The anti-war song ‘Another Way’, on the other hand, tells it like it is, with the sounds of thunder and a constant couple of notes emphasising that the fight against terrorism will never end. Dean sings with such deep feeling of his hunger to find another way, his words really hitting home. His voice almost acts as a second instrument to accompany Timney’s amazing strings in this track, the background vocals especially biting into your soul. The cleverly put together lyrics combine with these distinctive sounds to create an outstanding song - possibly my favourite on the album

Sign up to hear upcoming shows, albums, and events.

Copyright © Dean James and the Black Dogs - All Rights Reserved.